ayiki-pisim is frog moon in nêhiyawêwin
for the month of April
today I am remembering
the Frog Moon Café
four years ago
we sang, laughed, cried, listened
maybe it's time
for another
﻿ 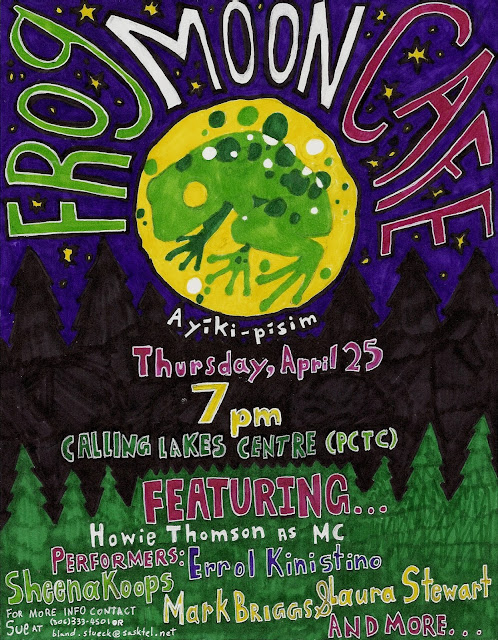 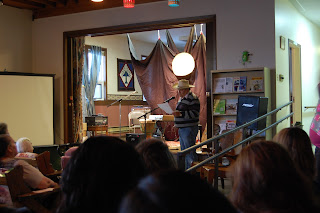 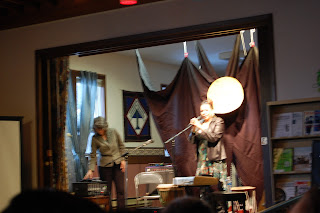 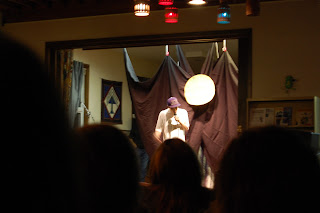 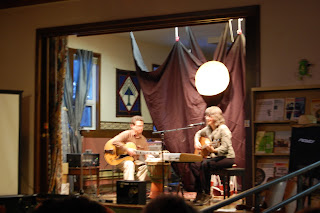 read Sue's blogpost
frog moon magic
http://poachedeggwoman.ca/frog-moon-magic/
thank you Sue
for all you do
Posted by sheena at 8:00 AM 2 comments:

Since We Last Met

Since we last met, my Treaty Walk has been like a reality tv show and now I'm waiting for an editor to come along and help me pull out clips to tell the story.

Perhaps to get started the editor would ask the question, "What is a Treaty Walk?"

I might reply. A treaty walk is like going to the garden -- back in the days when I lived at home and going to the garden meant fighting my way through Dad's long rows of corn, squash, pumpkin, beans, peas, swiss chard, carrots, beats, and potatoes -- and picking something from the earth. A treaty walk is like taking that good gift from the land and preparing it for my own nourishment or to share with others.

"All well and good," says the editor. "Can you tell me more? How about completing some of these prompts?"

One highlight I've experienced with my Treaty Walk is...

One assumption for me in working with Treaty Education is...

The most important thing for me on my Treaty Walk is...

My most awkward moment Treaty Walking since we last met is...

Yesterday, I tell the editor, I experienced a highlight on my Treaty Walks. We shared an Orange Shirt Gathering at our school. One of my adult students, Michael Cardinal, in Oski-pimohtahtamwak otayisīniwiwaw (they are into their new journey to knowledge) closed our gathering playing Led Zeppelin's "The Rain Song" because the sun will shine after the rain or storm, he told us. 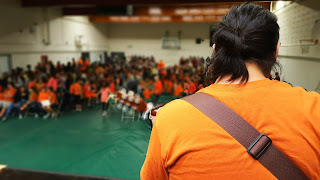 One assumption for me in working in Treaty Education is that it is easy for educators to understand how important it is to show up at events where indigenous peoples are offering us gifts, Treaty gifts of miyowîcêhtowin (getting along together); pimâcihowin (making a living on the land); wîtaskêwin (being one with the land) and wâhkôhtowin (practicing our kinship). For example, bringing students to the Treaty Four Gathering in Fort Qu'Appelle, in the week of September 15 each year, should be easy. I see now, this is an assumption, but it does get easier, I'd like to tell people. Once you've been there once, you'll understand how to come back the next time. But the first thing is to just go, is to show up, as I remember Dr. Shawneen Pete and Dr. Mike Cappello reminding us at the 2014 SAFE conference. Sheena August, Prairie Valley School Division communications officer, and I had great discussions about the importance of experiencing something before understanding. Sheena (we had so much fun being two Sheena's) got right into the spirit of things, working with Arwen to get the tipi pole back in the flap as she had been shown to do earlier, if it slipped out. 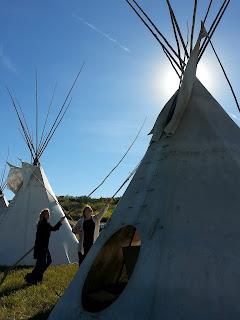 The most important thing for me on my Treaty Walks is to remember that Treaty is about relationships, and relationships need opportunity, time, nurturing, sunlight, rain, and wind to grow. Treaty Walking is not a checklist of activities on a bucket list. It is going about regular life, being mindful of the great gifts and opportunities envisioned in the Treaties. I'm thinking about running into Daya Madhur and Claire Krueger at the Treaty Four Gathering, and there they were, going about their lives, huge smiles, cameras slung around their necks, backpacks ready for a day on the land as Treaty people, as Treaty educators. 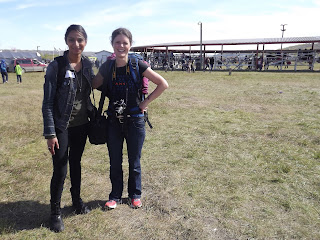 ﻿
My most awkward moment since we last met... oh there are so many. It might have been trying to get a good picture of His Excellency David Johnson, Governor General of Canada as he visited Treaty Four Grounds for the first time in his life, and was the first representative of the Queen to return to meet with the crown's treaty partners in 142, since the Treaty was signed. I had to dodge security, media, well-wishers, and handlers. I did get a few with him talking with my friend, Maddie Sanderson. I also helped arrange that my husband, Michael's grade 12 Canadian Studies class was able to witness the nation to nation speeches and meeting, but that wasn't really awkward. Now I'm just bragging. 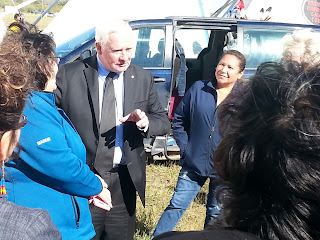 "Well, now I have something to work with," says the editor. "But what about our next episode? Let's do an A-Z brainstorm for Treaty Walks."

Imagine spending the afternoon sitting on a blanket and enjoying time with women, or if you're a guy, sitting with other men, and sharing a meal, served by young men in our community. Imagine this circle, together as Treaty people, accepting the gifts we have to offer one another as good neighbours.

If you've never been to a traditional feast before, why not join us on Monday at noon, on the Treaty Four grounds.
Here's a picture of my feast bag: 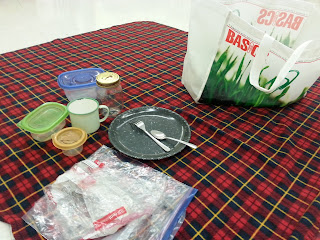 FEAST KIT:
Posted by sheena at 8:00 AM No comments:

Monday, September 12th
6:00-9:00pm
Large Teepee at the Treaty 4 Governance Centre
Fort Qu'Appelle, SK
Appetizers by the Sioux Chef
All Welcome by invitation of the
Faculty of Education at the University of Regina.
Come for the Feast at Noon.
Relax the afternoon away in the valley.
Join us for Monday evening's conversation. ﻿ 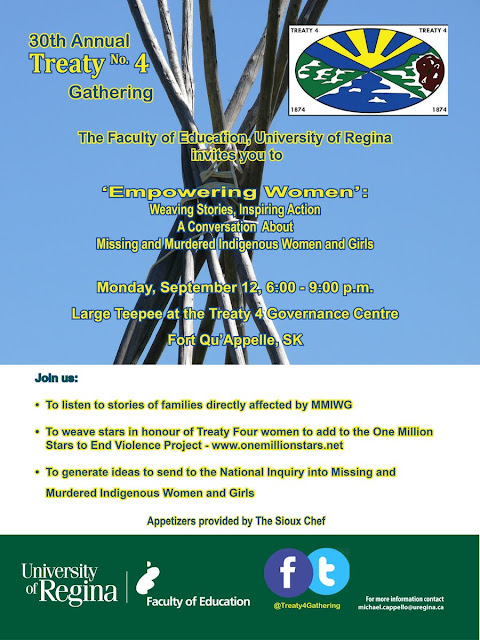 Posted by sheena at 2:08 PM No comments:

For Aboriginal Storytelling month last February, four students from Bert Fox Community High School were invited to the Estevan Comprehensive School to present the Blanket Exercise which tells the history of Canada through the voices of indigenous peoples. The blankets represent the land and participants play the role of sovereign indigenous peoples. The facilitators play the role of Europeans who first come to the land as friends, but as the power begins to shift, and Treaties are broken, assimilation and colonization become a reality.  http://kairosblanketexercise.org/about 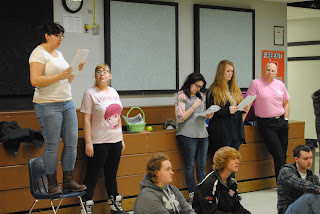 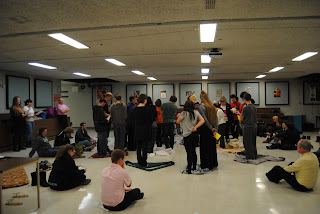 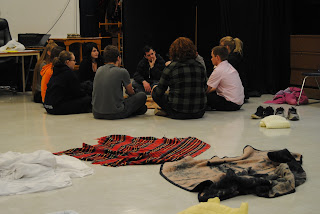 Tim Lee and James Jones, teachers at the Estevan Comp, assigned reflection questions. This is the last of five questions asked.

Analyze the overall effectiveness of the presentation.

There were a few sheets with comments like, "We could have learned more in class. It was a normal presentation to me. Honestly, I learned nothing. None of it was emotional to me. This did not inspire me. Some of it may inspire and others it may not. It didn't really have any effect on me."
But as you can see from the responses above, it was overwhelmingly well-received and an optimum educational experience for all involved. 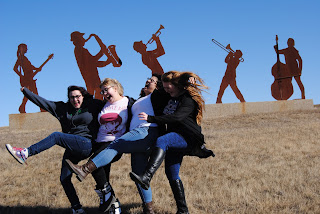 Note. Excerpts from the ECS reflections on the Blanket Exercise can be found on Treaty Walks question by question on the following dates:
1. What was your general impression or thoughts about the Blanket Exercise? Did you enjoy participating? August 14th, 2016
2. What did you learn from Friday's presentation? August 23rd, 2016
3. What was the most emotional moment for you? Why was it emotional? Consider the speaker's values, perspective, biases and tone. August 29th, 2016
4. The Blanket Exercise is designed to inspire action. How could an event like this inspire people? What could we do? September 2nd, 2016
5. Analyze the overall effectiveness of the presentation. September 9th, 2016
Posted by sheena at 8:00 AM No comments: 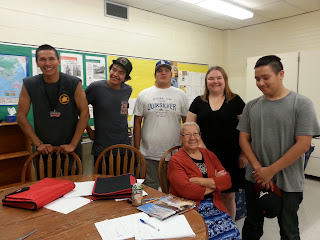 "We were honoured to have Elder Alma in our class," says Truth. "I learned a few things about sweetgrass and smudging, and what you're supposed to do with it after you're done using it. You take all the ashes and put them somewhere in your environment that's really quiet. I felt really good and happy when Elder Alma was with us because of the sudden deaths we have experienced. I will remember our class because it's the best class I've had so far. When Elder Alma said her own language, it made me feel like everyone should learn their own language. She reminded me of my grandmother. She's exactly the same, I think."

"We were honoured to have Elder Alma in our class," says Jerrett. "I learned a lot of different things that day about Residential school, my culture, and not only just my culture. She said a lot about the Europeans and such, meanings about life and it was a pretty good feeling to have."

"We were honoured to have Elder Alma in our class," says Shorty. "I learned about certain medicine, how to treat them, and how to thank them after you are done using them. I felt comfortable when we spoke with her as if she was my own grandmother. I will remember all the stories she told us and the teachings she left with us. She reminded me of my grandmother who passed away, just how sweet she was, along with her wise words."

"We were honoured to have Elder Alma in our class," says Sheena. "Since the beginning of the school year, we have learned of three deaths of former colleagues. One of the women worked very closely with some of us, and we were looking forward to working with her this year. The other woman and her husband had worked with many of us, closely, in the past. Our school is grieving, so Elder Alma agreed to come and help us in this difficult time. She led a smudge and a talking circle for any staff or students who wanted to participate. She came back with us to our room. I'll always remember how she told the young men that she was so proud of them, that they were like her grandsons. She said that when older people see young people, so respectful, learning what they need to learn, that they make the old people so happy."

"We were honoured to have Elder Alma in our class," says Ashton. "I was actually grateful to her for teaching us how to handle the sweet grass and sage after we were done. It reminded me back in the days when she used to teach me Cree. She asked me to read some Cree words, and I kind of got it. It was very good to see her again, because I haven't seen her in a while. After the smudge, it made me feel more open minded. It made me feel good."
Posted by sheena at 3:26 PM No comments: 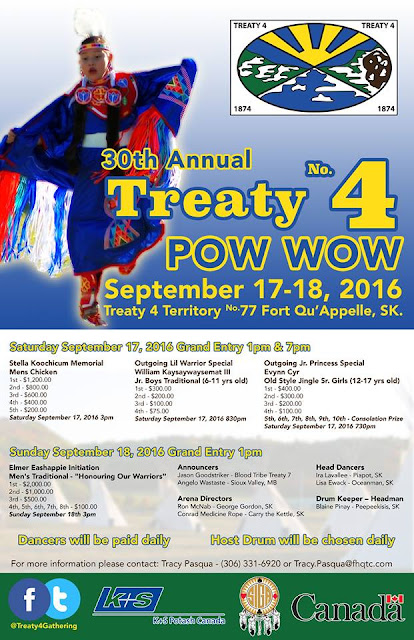 Posted by sheena at 8:00 AM No comments: